An Interview with Saad Dagher

Over the past decades, the agricultural sector in Palestine has been continuously shrinking. This development has been particularly harsh when it comes to peasant farmers who utilize traditional and sustainable farming methods. While fruits and vegetables are largely imported from Israel, neoliberal developmental policies and limited access to land and markets have diminished the Palestinian agricultural sector, which now contributes less and less to Palestinian GDP. Attempts to build an export-oriented, industrialized agricultural sector that produces cash crops and uses chemical pesticides have badly damaged small producers,[1] as have the Palestinian Authority’s attempts to turn the Palestinian economy into a service-based economy. In my conversation with Saad Dagher, I wanted to find out more about how these developments have affected traditional farmers in particular and what could be done in order to stop this profession from becoming extinct.

Traditional Palestinian farming actually is sustainable agriculture, but this sector faces a lot of problems because we are losing the relevant knowledge in many essential fields. One example of this is local seed production. In the past, farmers knew how to produce and to preserve their own seeds, which would be used the following year. If you now ask the younger generation, they wouldn’t know how to do this.

Another issue is the loss of knowledge about how to build and maintain the stone terraces that are characteristic of the Palestinian landscape. They prevent soil erosion, make it easier for farmers to cultivate their land, and retain water. Each farmer in the rural areas used to be able to build these terraces. Now, however, people who can build them are not easy to find. It’s a very simple practice, but of course you have to learn it first.

The pruning of trees and the preparation of the land for rain-fed summer crops are other examples of practices that we are losing knowledge of. There are special techniques that need to be employed in order to preserve moisture in the soil for rain-fed summer crops. Even some of the terminologies for these techniques are getting lost to the point that even people working in agriculture nowadays don’t know them anymore. Every farmer used to know these terms, as well as how to prepare the land, and especially why. There is a special term for the style of plowing that was used to prepare the soil, called “shaqqa farkha.” They used to say, “Now you have to plow shaqqa farkha!” It means that you have to open the soil by plowing trenches and then covering the open soil again in another line, thus keeping the soil protected from the sun. This way it doesn’t lose its moisture but at the same time keeps the right temperature in those places where the seeds are planted. We are now losing these kinds of things.

What do you think are the reasons that this knowledge gets lost?

That is very simple – for one, most of the younger generation are not working in agriculture anymore. Secondly, the “modern” model of agricultural practices creates dependencies. These intensive methods of agriculture don’t promote knowledge. You receive the recipe from the company that sells you the seeds; you are being told how to fertilize them, which kind of fertilizer to use, how many times to spray the crops. This means that even those young people who still work in farming usually practice models that do not require them to be creative. There is a big influence on the part of chemical companies that are doing all they can to make farmers dependent on their products.

The overall number of farmers is clearly decreasing. People move to the cities to work there; for example, to work in the security forces, in NGOs, ministries, construction, you name it.

You wrote an essay for the book Conscious Choices: A Guide to Ethical Consumerism in Palestine that will soon be published by Heinrich-Böll-Stiftung Palestine & Jordan.[2] In this text, you mention that traditional farming can affect social structures in rural areas. In which way do you think that happens and how does its decline impact livelihoods?

There are different effects on social relationships. When I grew up, for example, my mother used to create seedbeds to grow local tomatoes, local peppers, local eggplants, etc. Often she would only have one or two seedbeds and she would get the rest from our neighbors in the village. She would give them tomato seedlings and in turn receive pepper or eggplant seedlings, and the people in the village coordinated who would grow which plants. This had a strong effect on social life.

Another example: as young children, we used to help our parents in transplanting these seedlings. This meant that even the social life inside the family was different, and we would spend much more time together than is usual nowadays. Farmers used to harvest their crops manually, and each family would support the others during the harvest and the plowing. I was part of this process when I was young. Our family had a mule for plowing just like other relatives and neighbors, so we went out together and worked together. Some farmers have now started to use herbicides instead of plowing, so this social aspect is gone, this interaction inside and outside the family.

Who are the farmers that still use traditional methods now?

They are the ones who don’t want to work for others; they are independent characters. They are people who like to own their time, to work for themselves and not for others. So there are still some people like that, but only a few. In my village there are maybe four or five of them left.

Some families now only visit their fields during the olive harvest and some don’t even go then and instead give their trees away or hire others to harvest them. Many people in rural areas don’t even know the boundaries of their fields anymore.

Fortunately, during the last ten years, there have been some people who are going back to traditional agriculture with the help of programs from NGOs such as the Palestinian Agricultural Relief Committees (PARC) or MA’AN Development Center and others, who do land reclamation and land rehabilitation. It is noticeable but you cannot say that there is a movement. If the development continues as it is now, traditional farming will certainly die out.

In the 1950s, we used to export wheat to Jordan and the Gulf countries. Now we can barely cover 4 to 5 percent of our own wheat needs. We used to export watermelons, tomatoes, oranges, lemons, and bananas. Now we produce very little. So if it continues like this, we will not be able to feed ourselves. One of the reasons for this is, of course, access to water and land that has been very limited since 1967, but this is only one of the reasons. In my village, Mazari’ Al-Nobani, we used to produce more wheat than needed to cover our local demands, only using rain-fed agriculture without irrigation. We produced more than we needed of olive oil, figs, grapes, and almonds, and we produced all kinds of cereals and legumes. More than 80 percent of the households had sheep or goats. Now, nothing. In this case, it’s not about the water or access to land since nothing has changed in my village in this regard. Now only one or two people produce wheat and legumes, and nobody produces dried figs. More than 98 to 99 percent of figs have disappeared; same with almonds. All we have left are olives. The agricultural biodiversity has decreased significantly.

What do you think would need to change to reverse this development? Or rather, do you think it should be reversed?

Of course it should, but in order to go back, things have to be rethought. There have been huge changes in our lives since the 1950s. Everyone has one or two cell phones, Internet, and a lot of electrical equipment, so everyone needs money to charge their mobile phones and pay for their electricity, for their water, for everything. People need a stable source of income now.

In order to bring people back to their land, to the farms, we need a strategy to make agriculture more profitable, income-generating, while at the same time making the rural areas more attractive to young people. Young people need a special infrastructure, which is why they leave their villages and move to cities like Ramallah. Urban areas are much more attractive to them.

What do you think consumers can do to help make these kinds of changes?

We can do a lot. Small-scale producers need support from our side, and that starts with simply buying their products – for a fair price. We need to support some good initiatives in the villages, cooperatives, and other locations. I have some friends who live from agriculture, but they face marketing problems because people don’t know about them and they have a hard time reaching out to customers. Why not start – or rather continue since others are already working on this – to upscale Palestinian ecotourism? Why not go to the villages instead of staying in hotels in Ramallah or Jerusalem? It creates jobs and income. Ecotourism helps people to market their products, and it could make villages more attractive for younger generations.

We don’t have agencies or ministries who support the initiatives that are already working on these kinds of issues. We need initiatives like Sharaka[3] in every city, and we need many of them. But we also need to bring together all these good initiatives that already exist, and we are working on this. There is a Palestinian eco-village movement that I am currently working with who are trying to create a movement in Palestine that brings together all these people.

I used to work with the Arab Agronomists Association, and I am still supporting them on a volunteer basis as they are now starting to establish an agro-ecological farm in the village of Farkha, near Salfit. At the same time they will establish ten ecological home gardens and are planning to establish a solid-waste-management system in order to compost the organic waste of the whole village. It will be the first project of this kind in the West Bank that encompasses an entire village. It can then serve as a training center and example for others. Our plan is to convert Farkha into an eco-village.

So these are some things in terms of collective and institutional work to address the decline of traditional sustainable farming in Palestine. But every one of us can individually make small contributions by changing the way we think about our food.

Saad Dagher is an agronomist and environmentalist who specializes in agro-ecology, an area of study and practice with much in common with permaculture. He recently established his own farm and, besides numerous volunteering engagements, is also an experienced Yoga teacher.

The interview was first published in This Week in Palestine's May 2015 issue.

[2] The book was highlighted in This Week in Palestine’s April 2015 issue.

[3] Sharaka – Community Supported Agriculture is a volunteer-run initiative that works towards food sovereignty in Palestine. 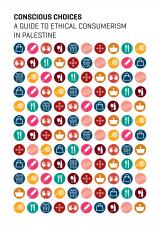 Download - Conscious Choices: A Guide to Ethical Consumerism in Palestine

During the summer of 2014, environmentalists Muna Dajani and Lina Isma’il conducted research for an innovative Palestinian guidebook, which will soon be published by the Heinrich Boell Foundation’s Ramallah office. The authors visited farmers, artisans, and companies throughout Palestine, and wrote 100 profiles introducing their work. The result of their journey is a guidebook that invites its readers to get to know the people behind the products they buy, and to build and expand their own individual network of producers.