"Ambassadors for Women’s Rights" Project: Accomplishments and Successes despite the Pandemic

A virtual conference, the establishment of a commission for Palestinian female academics, discussion sessions on the internal regulations and bylaws of the commission, a youth camp, awareness-raising workshops, and the fingerprints for youth ambassadors who benefited and developed their experience through the project. The aforementioned were part of the outputs of “Ambassadors for Women’s Rights'' project implemented by the Community Media Center (CMC) in Gaza, with the support and partnership of the Heinrich Böll Foundation - Palestine and Jordan.

The following report presents the activities, events and outcomes accomplished in 2020 under the “Ambassadors for Women’s Rights” project.

Hidaya Shamo’un, Head of Board of Directors at CMC, highlights the outcomes of the project: “the project culminated in a virtual conference on October 20th this year, in which the results of the qualitative research study on the reality of female academics in academic institutions in the Gaza Strip was presented. The research study was conducted by the researcher Dr. Abeer Thabet and was a major component of the project’s activities”.

According to Shamo’un, "the research study diagnosed the academic reality, in addition to the difficulties, challenges, opportunities and issues of gender-based discrimination in academic institutions. This approach is in alignment with the strategies of the Center, focusing on empowering the role of female academics and university students in defending the rights of women and combating violence against women in academic institutions in the Gaza Strip”.

She added, “the project has achieved important and significant results at two levels, the first being the formation of the Palestinian Female Academics Commission and developing the its internal regulations and working plan for the coming period.” Shamo’un noted that the establishment of this commission is considered a hallmark for CMC and an effective and strong step towards improving gender priorities within Palestinian universities. The second level she referred to is the capacity building and empowerment of 25 female and male ambassadors who will work on raising the awareness of their peers and community members on women’s rights.

Ms. Andaleeb Adwan, the director of CMC, spoke about the activities of “Ambassadors for Women’s Rights.” She highlighted that in addition to the preparation and printing of the research study about the reality of female academics and releasing it in both Arabic and English, the camp “Support Her 2” was conducted for youth ambassadors. The camp deepened the ambassadors’ skills and knowledge acquired in the first phase of the project in 2019. It aimed in its second phase to empower them as trainers who will work in the field to raise the awareness of their peers on women’s rights. In this regard, 15 awareness-raising workshops were carried out in all areas of the Gaza Strip with the participation of 630 youth from both genders. It is worth noting that six workshops were held through Zoom due to the closure imposed on all governorates in the Gaza Strip.

Regarding the events of the project devoted to female academics, Adwan said: “six discussion sessions were held with the participation of around 100 female academics working in Palestinian universities.” Adwan indicated that these sessions were devoted to developing internal regulations for the Palestinian Female Academics Commission, which was named after consultations and deliberations between the participants. Additionally, a constituent body was formed with the participation and agreement of 65 women in academia who participated in the discussion and debate sessions.

Adwan added, "despite the difficulties facing Gaza due to the COVID-19 pandemic, the center has spared no effort in defending human rights including women’s rights. The efforts were carried out to achieve our goal this year to permeate the Palestinian academic field and for this work to be an integral part of cohesive community efforts.” 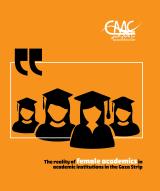 The Reality of Female Academics

The results of the research study “The Reality of Female Academics in Academic Institutions in the Gaza Strip” were shocking and recommendations were presented accordingly. The study was presented in the project’s virtual closing conference held via Zoom due to the COVID-19 pandemic.

According to Thabet, a questionnaire was used as a tool to collect quantitative data for the study. 20 in-depth interviews were conducted in five Gazan universities (Al Azhar University, Islamic University of Gaza, Al-Aqsa University, Al-Quds University, Gaza University). Additionally,  interviews with female leaders from women’s organizations we conducted as well as focus groups and case studies.

Thabet emphasized the importance of the study by saying “the study focused on the challenges facing women academics in universities in the Gaza Strip and the level of their knowledge of their rights. Additionally, the study examined the level of commitment by academic institutions in implementing and adhering to Palestinian laws, conventions, and mechanisms for defending women’s rights”.

From the findings and recommendations of the study, researcher Dr. Abeer Thabet, a professor in political science, explained how academic institutions partially adhere to the signed laws and agreements with full time female academics, while they discriminate against those working on a part-time basis. This includes aspects such as permanent status regulations, financial rights and administrative assignments and course distribution.

The Idea of Establishing the Palestinian Female Academics Commission

Professor Mahmoud Abdel Hadi, an administration and development consultant, emphasized that the Palestinian Female Academics Commission was formed to be an incubator for all women academics in the Gaza Strip, to defend their rights and work to bridge the gaps that they face in academic institutions and in public life. The concept of forming this commission stems from the recommendations of the working paper that was presented in the final conference of the project’s first phase. The paper eluded to the need to conduct an in-depth research on the reality of women academics in academic institutions in the Gaza Strip. Additionally, it indicated the necessity of forming a body that includes women academics, aiming to empower them and defend their rights.

Abdel Hadi added that “it was out of CMC’s experience and knowledge gained during the first phase of the project in 2019 that the center started contacting female academics and organizing a series of meetings to discuss and contemplate the establishment of a commission for women academics. This was with the purpose of having a commission tasked with combating gender-based discrimination that women academics suffer from, with the participation of female workers in Palestinian universities.”

At the same time, Abdel Hadi notes that “this commission is not a substitute to the Union of Academics, but rather a specialized body discussing and raising the issues of gender-based discrimination that female academics suffer from. It also seeks to develop the reality of female academics and improve their status in their participation within universities. Furthermore, it aims to enhance the response of Palestinian universities to gender requirements and combating all forms of gender-based discrimination and obstacles.”

After the formation of the commission, the center sought to organize a series of sessions to “develop the commission’s internal regulations and set the policies and rules regulating the commission, such as membership, method of affiliation, decision making, leadership and other matters. The sessions were carried out with the participation of female academics and a working plan was developed to be implemented over the next two years. The plan focused on expanding the participation base to include all female workers in Palestinian universities,” according to Abdel Hadi. He adds, “the plan also included the development of the commission’s strategies through seminars that built the capacity of female academics within their specializations, enabling them to perform administrative tasks related to the commission as well as developing and educating them and raising their awareness on gender issues. The seminars aimed to improve their capabilities in leadership, management, planning and strategy development to prove themselves within the commission and in their universities. They also aimed to develop the legal and policy systems within the commission to respond to their needs and to monitor and evaluate universities’ level of commitment and compliance to the requirements of gender justice.”

The training camp for youth titled “Support Her 2” was implemented over the course of five days with the participation of 25 young Gazan male and female graduates and students of both media and law.

Regarding the aim of the camp, Khuloud Al-Sawalmeh, the project coordinator of “Ambassadors for Women’s Rights,'' said “the training camp worked on developing the participants’ skills as trainers and facilitators, enabling them to transfer the knowledge and information to their peers, colleagues and community members. Hence, activating the community’s role and efforts in combating gender-based violence, discrimination against women, advocating for marginalized groups and raising their awareness on women’s rights”.

She added, “the training enabled the ambassadors to acquire skills in public speaking, whereby the participants conducted 15 meetings to educate and raise the awareness of their peers from both genders on the issues raised in the training. This was carried out in cooperation with grassroots institutions and universities in all areas of the Gaza Strip”.

Today, Fadwa Abdallah, a young female participant in the camp, stands confidently in front of the audience and camera, expressing her gratitude to what this project has offered her in terms of personal development and way of thinking. She says, “I used to know about the reality and situation of women, but now I understand it at a more mature level through analyzing and examining closely the reality and studying the laws. My belief in this just cause became stronger as I believe it should be an issue that concerns the public.”

For both Fadwa and the recently graduated young lawyer Husam El-Esawi, the camp “Support Her 2” constituted a basis to their understanding of human rights, advocacy and lobbying. El-Esawi says: “I have gained new expertise and knowledge that I was not aware of despite my specialization. The camp has developed my capacities and enabled me to become a facilitator and a trainer on women’s rights. This a result of the camp’s legal awareness sessions related to women’s rights and their status, in addition to human rights and international conventions on women’s rights.” He adds, “the project has made me an ambassador and a defender of women’s rights. It raised my awareness and knowledge of women’s rights as stipulated in local and international laws and how it related to religions and customs. It also strengthened my ability to combat all forms of violence and deprivation that women in our society suffer from. It deepened my sense and belief in the importance of activating the role of women and their participation in our society.”

The Community Media Center (CMC) is a non-governmental organization in the Gaza Strip that seeks to develop the role of media in addressing community issues. It plays a significant role in promoting the values of democracy, equality, and a culture of human rights, focusing on women and youth issues and highlighting them in various media outlets through the adoption of a human rights-based approach.