Less than four years after being recognized as a state party at the United Nations’ climate change negotiations, Palestine is now leading the UN’s largest group of developing nations. 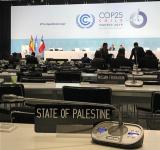 The COP, which stands for Conference of the Parties, is the supreme decision-making body of the United Nations Framework Convention on Climate Change (UNFCCC). For the past 25 years, parties have met on an annual basis at different locations around the world to negotiate strategies related to the implementation of the Convention. It includes 197 parties that have committed to submit national strategies serving the ultimate objective of the Convention, to support the global response to the threat of climate change. In light of the recent Intergovernmental Panel on Climate Change (IPCC) special reports that highlight the urgency of reducing greenhouse gas emissions and committing to not exceeding global warming of 1.5°C above pre-industrial levels as a target, this year’s COP25 is held in Madrid where parties meet in hopes of delivering urgent climate action.

Being part of the Eastern Mediterranean, Palestine is considered among the most climate-vulnerable countries in the world. Being under military occupation does not only create political instability, but also a lack of sovereignty over its natural resources and national borders, leaving it severely hampered in adapting to climate change and implementing climate change plans and strategies. Despite having the vision, knowledge, plans, and strategies of what is required for climate action, Palestine lacks the proper means of implementation in the form of capacity building, technology development and transfer, and finance.

On December 3rd, 2019 during the COP25, the French Development Agency (AFD) and the Green Climate Fund (GCF) officially signed a Fund Flow Agreement for the project worth 45 Million Euros on water banking and adaptation of agriculture in Northern Gaza. It aims to improve farmers’ resilience and water use efficiency. Gaza suffers from freshwater and groundwater scarcity and deteriorated quality, with 90-95% of its water being contaminated and unfit for drinking or irrigation in reference to WHO standards. Palestine is one of a few Arab countries to have received a fund from the GCF, after Egypt and Morocco. The GCF is an operating entity of the financial mechanism of the UNFCCC and is the primary channel for international public finance supporting developing countries in responding to climate change efforts of the UNFCCC. In addition to this project, Palestine was selected to receive support from the NAMA Facility for the project “Low Carbon Olive Value Chain” with a total value of 15 Million Euros. NAMA Facility is a body established following climate negotiations in Doha in 2012 to support developing countries and emerging economies to implement ambitious Nationally Appropriate Mitigation Action (NAMAs). Other funding projects related to water supply and adaptation in the West Bank have been conducted before, however, according to Zena Agha from Al-Shabaka network, no projects will achieve a lasting impact so long as the occupation continues and Israel maintains control over the majority of water sources.

The Largest Bloc of Developing Countries Chaired by Palestine

Apart from the Palestinian delegation participating in this year’s climate negotiations, Palestine is the chair of the G77 and China, the largest single coalition of developing countries at the United Nations. The group now includes 135 nations that negotiate as a bloc in the UN and represent 80% of the world’s population.

Being a state representing the bloc is a powerful boost for Palestine’s presence in the international arena. Chaired by a Palestinian delegation from the Ministry of Foreign Affairs led by Ambassador Ammar Hijazi, several parties of the G77 bloc have praised the Palestinian delegation’s balanced, transparent, inclusive, and participatory approach as a coordinator for the group.

Moreover, being a chair of the group creates intriguing political implications for Palestinian politicians in international negotiations. It puts Palestine on equal footing with full member states of the UN and forces states that don´t recognize the state of Palestine to sit and negotiate with it as equals. This undoubtedly is a big advancement for Palestinian diplomacy. For Palestinian participants of the COP it is encouraging and revitalizing to see their political leaders in the role of active negotiators rather than victims.

How Transportation Can Help Jordan Achieve its Climate Commitments

Jordan is joining the fight against climate change. The desert kingdom has determined to reduce its greenhouse gas emissions by 14% until 2030. The transportation sector offers a unique opportunity to implement the country’s climate commitments while also tackling the mounting traffic congestion problem.
By Ali Attari

Expectations were high for COP24, yet world leaders failed to adequately respond to climate change. What happened at COP24 and what does this mean for Palestine and the region?
By Ruba Anabtawi

Climate change and human rights – Can the courts fix it?

Overview
Climate litigation is on the rise - in Germany, in Europe and worldwide. What role can courts play in the fight against climate change? This article shows the link between human rights and climate change, its implications, and introduces some of the cases.